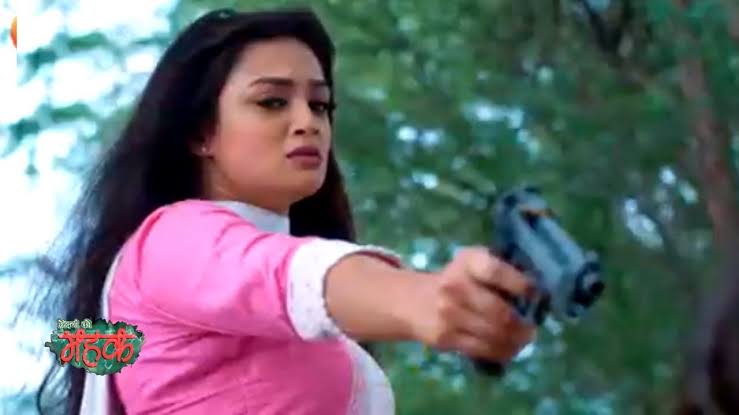 Karuna says to Shaurya that was my past that I forgot while marrying your dad. It had gone. I started a new life. Please listen.. please forgive me. i can’t hurt you. He shoves her hand. He says stop. She says can you accept anjali ? i can’t force you. Anjali deserves her mom. She shouldn’t pay for the sin i and her dad did. He says will you leave us all? She says you are most important for me. he leaves.

Kanta texts dolly we will come to meet mahek/ dolly says they shouldn’t come. They shouldn’t know this dirty truth.

Mahek is worried in her room. She recalls all that happened. she calls shaurya because his phone is off. she says he has to share his pain with me. Mahek comes to balcony and sees anjali running. She says anjali please stop.

Anjali runs on the road. A van comes and some thugs kidnap her. Mahek runs after them but she fails. Mahek is worried. shaurya comes. Mahek tells him everything. They rush towards the car.

Karuna comes to Anjali’s room with milk. She says i have my daughter today;. I am so glass. I will always take care of you. your ma is always with you. She takes off sheets to see its just pillows. Karuan is worried. She looks for anjali everywhere. She comes to mahek’s room but they aren’t there either.

Mahek and Shaurya look everywhere and ask people. His car breaks down. He sees glass on the road. His car is punctured. She says what will we do now? he syas we have to walk. A bike comes. He takes Shaurya and Mahek where the van went. They look at the van. They hear someone talking about a truck. Mahek says he is talking about the same truck. He peeks inn. They tie Anjali. she is crying. There are many other girls inside. He says we will sell them off in dubai. Mehek 04 October 2019 Update – Zee World Series

Shaurya says to mahek i have to do something. We have to save those girls. He stops the truck that is coming to take them. Mahek and shaurya hit the driver. He faints and they hide him.

Shaurya comes out as driver. A man comes out. Mahek and shaurya hit him and go in. Shaurya stabs one. Mahek releases the girls and they all hit the thugs. A thug points gun at Anjali. shaurya says leave her please. He says we will sell them off.

Mahek says to Anjali lets go home. She says I shouldn’t that’s not home. Mahek says are you crazy? She says no I don’t wanna create trouble. Shaurya says you will come with us.
Mahek shaurya and anjali come home. Karuna hugs her. She says thank you Mahek.

karuna says to Shaurya I was so worried. i was waiting for you all. Dolly says why did thugs run after you everytime? She says they kidnapped and wanted to sell all these girls. Harsh says this happens with you because your blood is dirty.

Shaurya says enough don’t say that word. He says shut up Shaurya. He says if I have to choose between ypu and ANjali I will choose her. If you don’t wnna live with them you can leave this house. Shaurya says you called Ma characterless. How dare you. Mehek 04 October 2019 Update – Zee World Series

She gave you all her love and years. She loved someone else before you and you have nothing to do with that. You had another wife who gave me birth too. You married ma for money. Harsh leaves in anger. Shaurya says to njali you are my sister. You will live here only. You past was a nightmare which is over. She says thank you brother and hugs him. Karuan is in tears. Harsh is angry.

Mahek comes to Shaurya and says I love you. He says winning your heart is tough. You get happy when I do things for others. SHe says you are such a nice person. How can I not love you madly. Shaurya says thank you. You make me a better person. He says where is my reward? Shaurya hugs her and goes to bed with her. Shaurya kisses her.

Karuna says dont’ go please. If you want i will leave this house. Harsh says you chose this girl over me and so did my son. He chose his step and characterless mother. You have disappointed me. Dolly says this is not right. Harsh leaves. Dolly says this girl will ruin this house. Anjali says to Karuna ma I shouldn’t have come here. I am sorry.

Shaurya goes inside. Karuna takes her inside. Mahek says to Shaurya you have to talk to papa please. only you can handle this. Anjali gives Karuna water. karuna is crying. She says ma please don’t cry like this. I wish i could do this. i can still leave this house.
Shaurya says dad won’t understand. he is blackmailing us. Anjali is my sister and dad can’t change it.

karuna says you won’t go anywhere. Shauyra says he left because of his ego. I will not accept this. mahek says you are right but papa shouldn’t live outside this house. We have to find a solution.